In addition, a displayed documentary produced by BHRC provided a brief background of the Baloch conflict with Pakistan. In his opening address, Dr Naseer Dashti, executive president of the Baloch Human Rights Council, while briefing the meeting on the human rights violations and atrocities perpetrated in Balochistan, observed that the international community’s intervention is imperative. He asked the international community that there should not be any discrimination in dealing with crimes against humanity committed in Europe, Africa and Balochistan.

Dr Burzine Waghmar, a researcher at the School of Oriental and African Studies, observed that China’s entry into Balochistan in disguise of development with its multi-billion CPEC projects has only contributed to environmental disaster and the socioeconomic marginalization of the people.

Peter Tatchell of the Peter Tatchell Foundation observed that human rights violations in Balochistan are a direct result of Pakistan’s forcible annexation of Balochistan into Pakistan and the subsequent struggle of the Baloch people for their right to self-determination. In this regard, he proposed a stepwise plan to peacefully resolve the Baloch conflict with Pakistan. The steps included an UN-supervised ceasefire, release of all disappeared prisoners, opening Balochistan to international media, rehabilitation of internally or externally displaced persons, and an UN-supervised referendum to find out the will of the Baloch people.

Considering the scale and magnitude of crimes against humanity in Balochistan, it was suggested that the UK parliament, and the international community, should initiate inquiries into the situation and make Pakistan answerable for failing to comply with its international obligations. Baroness Natalie Bennett promised to raise the matter in the British Parliament.

To watch the complete procedure of the meeting, please click on the following link: 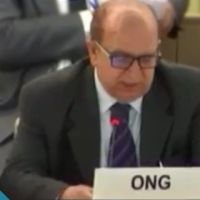