While highlighting the atrocities being perpetrated on the Baloch, the BHRC representative Qambar Malik Baloch in his intervention during the general debate on item 3 of the 43rd Session of the UNHRC demanded that the human rights violations in Balochistan must be stopped.

He drew the attention of the council to the human rights violations being perpetrated by the Iranian and Pakistani states against the Baloch people who need urgent attention from the international community.

The BHRC representative asked the council to take notice of thousands of the Baloch political activists whose whereabouts are not known while thousands have been the victim of the kill and dump policy of the Pakistani state. He said that the physical elimination of the Baloch political and human rights activists by Pakistan is to counter the Baloch national struggle for the right to self-determination as enshrined in the UN conventions.

Bringing the attention of the council on the socio-cultural and economic exploitation of the Baloch, he observed that in their assimilation strategies, the Iranian and Pakistani states are denying education in the Balochi language and cherished Baloch cultural values are being degraded by their media. He said that Balochistan is rich but its people are kept poor because of the ruthless exploitation of resources to the advantage of Punjabi and Persian nations. Pointing to the disgusting role of China, he pointed out that now, China is emerging as a new colonial power in Balochistan eyeing the Baloch resources under the CPEC.

He asked the council president that as according to UN conventions, these actions of the Iranian and Pakistani States are genocide acts, appropriate actions should be taken and immediate and meaningful intervention should be initiated to stop the atrocities on the Baloch. 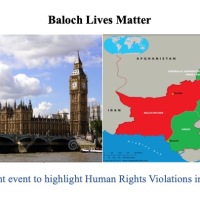