26 October 2010: The Pakistani government must investigate the torture and killings of more than 40 Baloch leaders and political activists over the past four months, Amnesty International said today. Activists, politicians and student leaders are among those who have been targeted in enforced disappearances, abductions, arbitrary arrests and cases of torture and other ill-treatment. The violence takes place against a backdrop of increasing political unrest and Pakistan army operations in Balochistan, south western Pakistan.“The Pakistani government must act immediately to provide justice for the growing list of atrocities in Balochistan,” said Sam Zarifi, Amnesty International’s Asia-Pacific Director.

“Baloch political leaders and activists are clearly being targeted and the government must do much more to end this alarming trend.”Among the latest victims of the ongoing violence are Faqir Mohammad Baloch and Zahoor Baloch, whose bodies were discovered in the district of Mastung on 21 October 2010. Faqir Mohammad Baloch, a poet and member of the Voice of Missing Baloch Missing Persons, was abducted on 23 September.Zahoor Baloch, a member of the Baloch Student Organization-Azad was abducted on 23 August. According to media reports, both received a single bullet wound to the head at point blank range and showed signs of being tortured. The discovery of the two men’s bodies is part of a growing trend of “kill and dump” operations. Bullet-ridden bodies of those who have been abducted, many showing signs of torture, are increasingly being found across Balochistan. Previously, the bodies of missing persons were rarely recovered.Other recent victims of the violence include Mir Nooruddin Mengal, a member of the Balochistan National Party’s (BNP-M) Central Executive Committee was shot dead by unidentified men near his home in Gharebabad, near Kalat Bazar on 13 October. Yasin Baloch, a member of Voice for Baloch Missing Persons and brother of Mujeeb Baloch, senior member of BSO-Azad, who had also been abducted, was shot by unidentified gunmen near Roshare Kalat on 10 October.

The victims’ relatives and activists often accuse the Pakistani security forces and intelligence agencies of carrying out these violations. A previously unknown organization, Sipah-e Shuhada-e Balochistan, has also claimed responsibility for some of the killings.“The Pakistan government’s ongoing failure to prevent abuses has emboldened the perpetrators behind these atrocities,” said Sam Zarifi.“The Pakistani government must show that it can and will investigate the Pakistani military and Frontier Corps, as well as intelligence agencies, who are widely accused of playing a role in these incidents.”Amnesty International warned that the rise in enforced disappearances and kill and dump incidents has aggravated political tensions in Baluchistan and led to reprisal killings by Baloch armed groups. On 14 August 2010, 17 people from Punjab province were killed in Quetta.

The Balochistan Liberation Army claimed responsibility, saying that the killings were in response to the killings of Baloch missing persons.Amnesty International urges all sides in the conflict to respect human rights and stop all torture, enforced disappearances, abductions, targeted killings and indiscriminate attacks.In November 2009, the Pakistani government announced a package of proposed policy and legislation reforms for Balochistan, and promised to resolve the cases of enforced disappearances, but it has so far failed to do so.Other prominent killings of Baloch activists since July include:On 11 July, Maula Baksh Dashti, a key figure in the Balochistan National Party and a former district Nazim (Chief Official) of Kech (Turbat) District was shot dead by unidentified gunmen in his native district.On 14 July, former Senator Habib Jalib Baloch, Secretary General of the Balochistan National Party-Mengal (BNP-M) was assassinated in the Parkaniabad area of Quetta, by three gunmen on a motorbike. He received seven bullets in the neck and chest and had been receiving threats.On 20 July, a leading member of the BNP-M, Liaqat Mengal, was shot dead on by three gunmen on a motorbike near his house in the Kalat district of Balochistan.

On 26 July, the bullet riddled bodies of two cousins, student Ashfaq Ahmed Mullahzai and Muhmmad Farooq Mengal, were recovered in Quetta, in the Kili Qambrani area.  Their relatives claim they had been abducted in May 2010.On 6 September, the body of Baloch lawyer Zaman Marri was found in Mastung.  He had received a single bullet to his forehead and his body showed torture marks. The lawyer was reportedly abducted by intelligence agents near his place of  work in Quetta on 18 August.On 23 September, the bullet riddled body of missing Baloch lawyer Ali Sher Kurd was found in Khuzdar district.  Kurd was reportedly abducted by Pakistani intelligent agents three days before.  His neck was broken and he showed marks of torture.Balochistan has a history of insurgency with local groups advocating greater autonomy. Four waves of violent unrest took place in 1948, 1958-59, 1962-63 and 1973-77.

Local people in Balochistan are demanding a bigger share of the revenue generated by the province’s natural resources, principally natural gas, which they believe now disproportionately benefit other provinces.Some Baloch groups have resorted to violence, while others are campaigning peacefully. The Pakistani national government has attempted to suppress this opposition by increasing the military presence in the region.Many people have died at the hands of the security forces in extrajudicial executions and deaths in custody, and thousands of people are reported to have been subjected to enforced disappearance. The confrontation between Baloch nationalists and the state is characterised by human rights abuses committed by all sides. 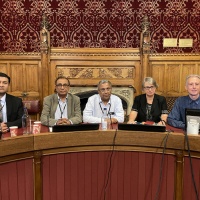 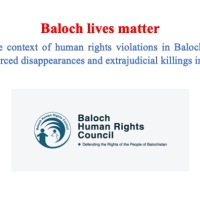 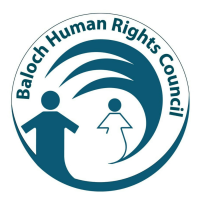